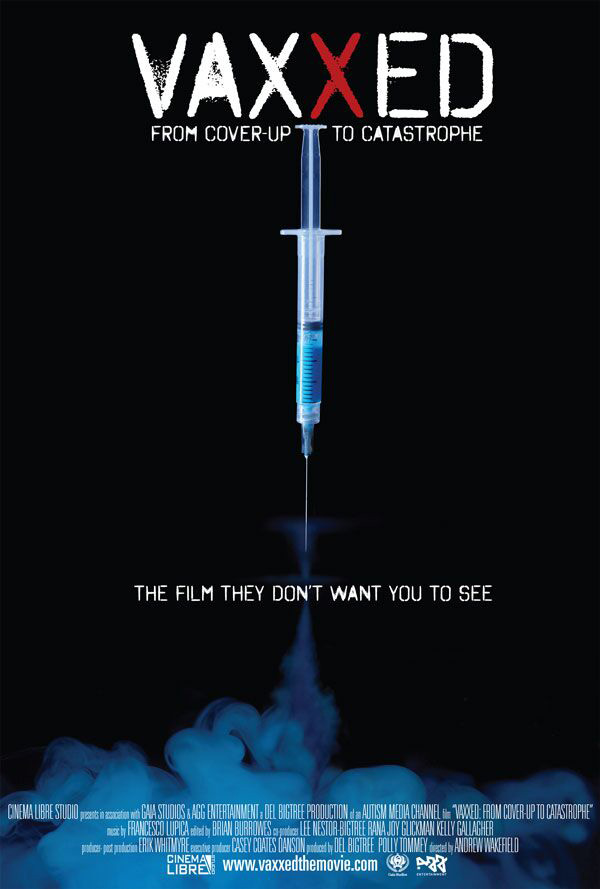 VAXXED: FROM COVERUP TO CATASTROPHE

“In 2013, biologist Dr. Brian Hooker received a call from a Senior Scientist at the U.S. Centers for Disease Control and Prevention (CDC) who led the agency’s 2004 study on the Measles-Mumps-Rubella (MMR) vaccine and its link to autism. The scientist, Dr. William Thompson, confessed that the CDC had omitted crucial data in their final report that revealed a causal relationship between the MMR vaccine and autism. Over several months, Dr. Hooker records the phone calls made to him by Dr. Thompson who provides the confidential data destroyed by his colleagues at the CDC. Dr. Hooker enlists the help of Dr. Andrew Wakefield, the British gastroenterologist falsely accused of starting the anti-vax movement when he first reported in 1998 that the MMR vaccine may cause autism. In his ongoing effort to advocate for children’s health, Wakefield directs this documentary examining the evidence behind an appalling cover-up committed by the government agency charged with protecting the health of American citizens. Interviews with pharmaceutical insiders, doctors, politicians, and parents of vaccine-injured children reveal an alarming deception that has contributed to the skyrocketing increase of autism and potentially the most catastrophic epidemic of our lifetime.” 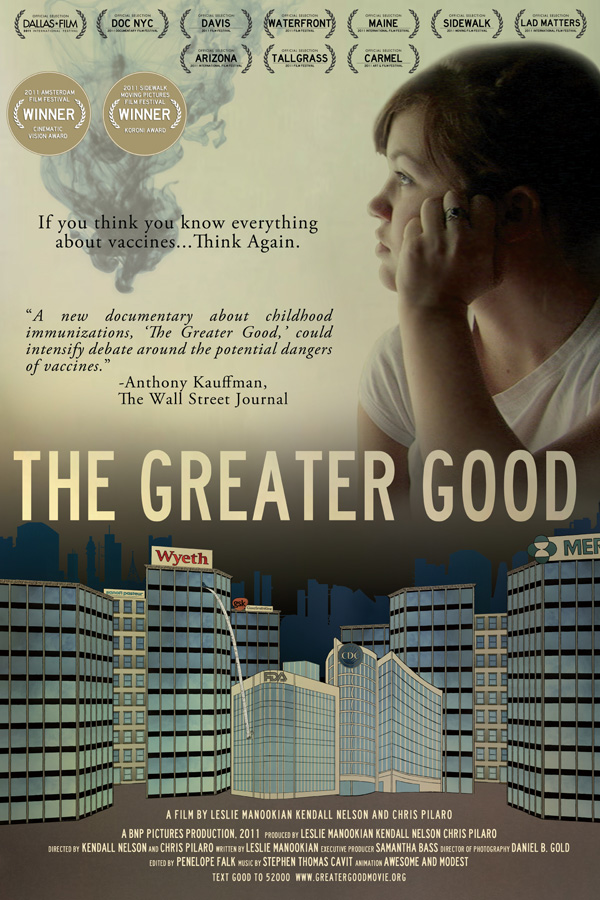 “THE GREATER GOOD is an award winning character-driven documentary that explores the cultural intersections where parenting meets modern medicine and individual rights collide with politics. The film offers parents, doctors and policy makers a safe space to speak openly, actively listen and learn from one another. Mixing verité footage, intimate interviews, 1950s-era government-produced movies and up-to-date TV news reporting, THE GREATER GOOD weaves together the stories of families whose lives have been forever changed by vaccination.” 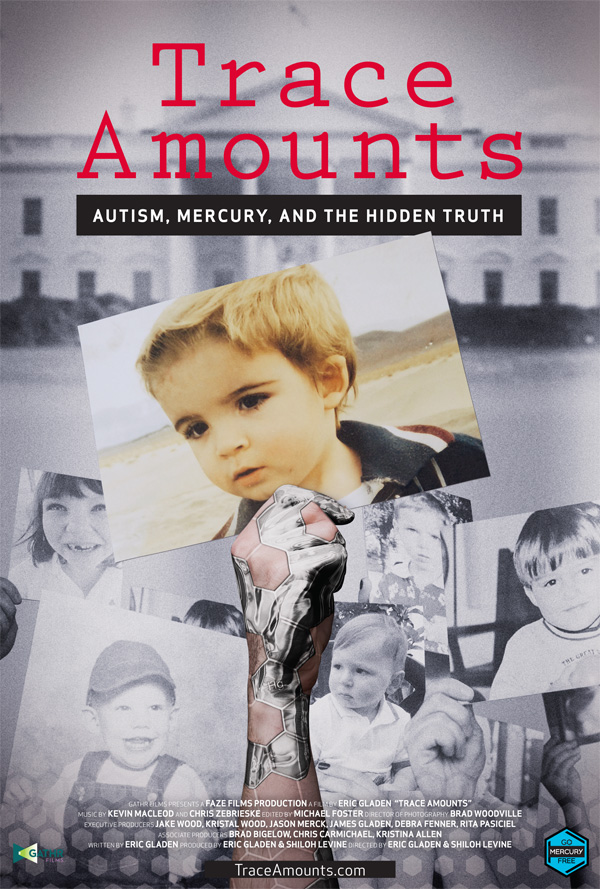 “During the past 20 years, the frequency of autism occurring in children has skyrocketed from 1 in 10,000 to 1 in 68, and the scientific community is no closer to determining a cause. Trace Amounts is the true story of Eric Gladen’s painful journey through mercury poisoning that he believes resulted from a thimerosal-loaded tetanus shot. His discoveries led him on a quest for the scientific truth about the role of mercury poisoning in the Autism epidemic. After recovering from a sickness that would bring him to the edge of despair, Eric Gladen began researching the science behind what had made him so sick. His research led him straight into one of the biggest medical debates of all time, the question of whether or not childhood vaccines are causing Autism. He would end up quitting his career, moving into an RV, and traveling the country interviewing experts and piecing together thousands of studies and leaked documents. But Eric wasn’t focused on the vaccines themselves, he was focused on something that belongs nowhere near vaccines — mercury. From the Mad Hatter Syndrome in the late 1800’s, to Pink Disease in the first half of the 20th to the Iraqi Grain Incident in the early 1970’s, humans have learned time and again of the debilitating neurological and physical damage that mercury can cause. Then why and how did it end up in our childhood vaccines? Trace Amounts explores the origin of the use of mercury in the vaccines and exposes the continued greed based decision to keep mercury in the vaccines through several decades. Trace Amounts is the result of nearly a decade of research and travel, in which top scientists, government officials, parents of children with Autism, and the average Joe unravel the truths, secrets, and tragedies, of the skyrocketing Autism rates. Could a tragedy, which brought one of the greatest nations to its knees, and stole a generation of children, have been avoided?” 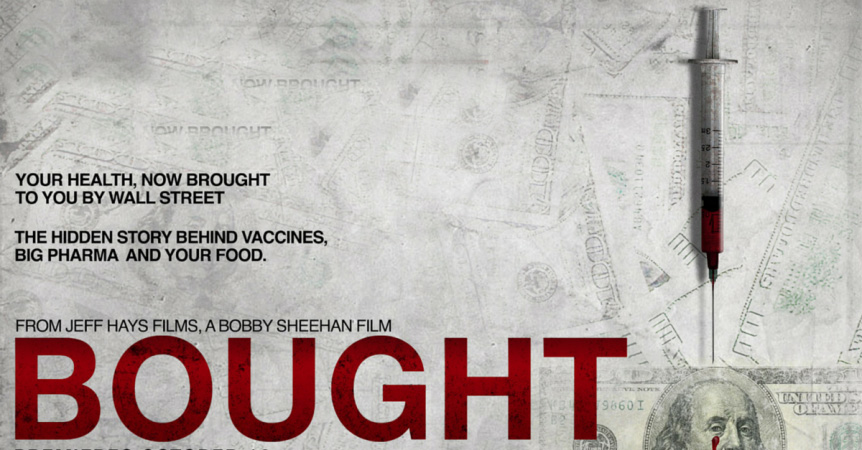 BOUGHT MOVIE: THE TRUTH BEHIND VACCINES, BIG PHARMA, AND YOUR FOOD

“Vaccines. GMOs. Big Pharma. Three big, BIG, okay… HUGE topics in one film. Why? Why not 3 films, why put all this in one movie? Great question, 2 answers. First and most importantly: We need to band together. We need a mainstream film, not another radical movie that only interests the “already converted”. Over 5 million people supported Prop 37 in CA. Reportedly, over 2 million worldwide marched against Monsanto in a global protest. There are thousands of actively involved parents focused on vaccine safety truth.”