We stepped into the open gash of the Vietnam War Memorial; a somber, sacred space with 58,320 names etched in long triangles of reflective black granite. I had some friends who fought in Vietnam but, thankfully, none of their names are on the wall. Still, we stood there in silence reading names of men we did not know honoring their sacrifice and mourning their loss.

Half way down the Washington Mall another Memorial with too many names was waiting. My daughter and I headed east, through the unseasonably cold November air, past the Reflecting Pool and the Washington Monument to the Vaccine Injury Epidemic Event. There the VAXXED bus, now with more than 8,000 names of the vaccine injured, was parked.

My daughter and I had landed in DC two days prior to VIE. We got in just in time to participate in the afternoon session of an informative and inspiring state leadership meeting. Dr. Toby Rogers was a featured speaker for the afternoon and did not disappoint. One of the attendees said that it was the best presentation on the vaccine issue that he had ever seen. This is extremely high praise as it came from a man who has been in this fight for some twenty years and has seen a lot of presentations on the subject.

Wednesday, we were invited to go with a national delegation to meet with Senator Rand Paul. In our lengthy efforts to find the entrance to the Senate Building we happened to bump into Senator Bennett of Colorado. We stopped him and introduced ourselves as his constituents and told him that my daughter and his daughter had danced together at a Denver dance studio. He was cordial but hurried on. It turned out that Senator Paul could not make our meeting but we had a great half-hour conversation with the Senator’s Chief of Staff.

Mary Holland, from New York, was in this meeting with us and happened to have a personal gift she wanted to hand deliver to Senator Bennett. Michael Bennett was born in a small, rural hospital in India and Mary is friends with a doctor who works at that hospital and still knows the doctor that delivered Baby Senator Bennett. Mary was tasked to deliver a beautiful, framed collection of photos of the hospital and of the Doctor along with Bennett’s birth record. She was kind enough to invite all of the Colorado folks with her to present the gift. Bennett was not available but we met with Bennett’s Health Policy aide who was enthralled with the present. We had an open, honest, and engaging conversation with him and we all felt that the aide really listened and understood. We can only hope that with Mary’s gift, the Senator will also be receptive.

We could see the Vaxxed Bus in the distance. Though the walk was longer and colder than expected, we got to VIE just in time. We waded into the crowd of some 3,000 people huddled there against the cold to bear witness to the realities and frequency of vaccine injury. Barbara Loe Fisher, co-founder of the National Vaccine Information Center, started the afternoon off. Del Bigtree followed, bringing fire to the cold crowd. Following Del, were doctors, scientists, politicians, lawyers, and activists encouraging us all to dive even deeper into vaccine truth, to share we know, to work together, and to do all we can to prevent to stop the horrific epidemic of vaccine injury.  As Bobby Kennedy wrapped up talking about a recent successful lawsuit forcing New York to accept medical exemptions, the sun broke through the clouds, shining a brilliant spot light on Bobby and illuminating the Capitol dome beyond.

Throughout the entire event, people gathered around the VAXXED bus looking for the names of their loved one or looking for an empty place to add yet another name. All day long, a steady line of thirty or so people waited to share their stories with the VAXXED film crew. The need and imperative of telling our stories was reflected again the next day at the African American Museum when I saw this quote from Bell Hooks projected on the wall:

I texted a couple of friends of mine back home in Colorado, to see if they would want their sons’ names on the bus. Both of them said yes. My daughter climbed a tall ladder and toward the top tip of the second “X”, inscribed numbers 7946 and 7964 and the names of our friends. These two, now young men, did not “make” a sacrifice as those on the Vietnam Memorial. They are a living sacrifice to the greed and inhumanity of the vaccine machine. Their lives and their parents’ lives forever altered by the deception of the pharmaceutical industry. Perhaps more than anything else during our participation in VIE, seeing the names of these two young friends on the side of the VAXXED bus filled me with the resolve and determination I know will be needed to protect Health Choice in 2020. 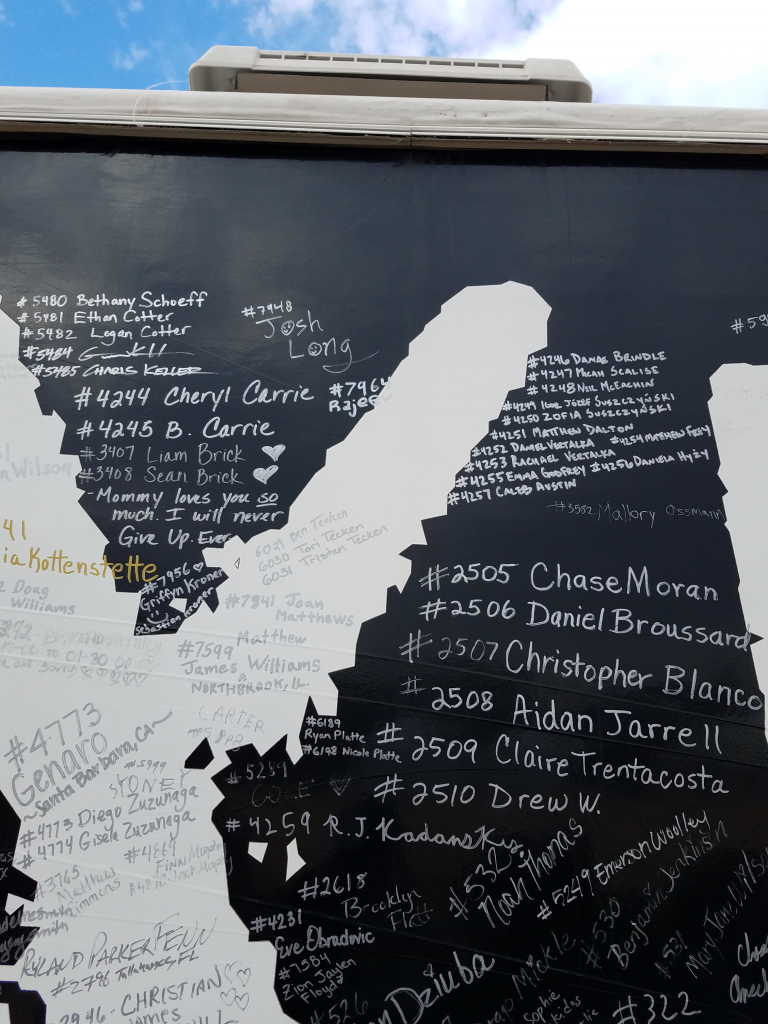